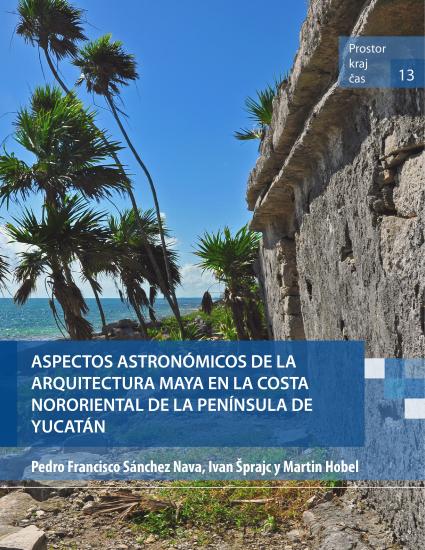 
An archaeoastronomical study recently accomplished in the Maya area revealed that the architecture on the northeast coast of the Yucatán peninsula is characterized by some peculiar orientation trends, which we have not been able to explain in a satisfactory manner. In order to acquire additional information, in November 2015 we measured the orientations of 34 structures at 21 archaeological sites. The book presents the results of this work, as well as some analyses based on all the available data from the northeast coast. Their distribution shows that the percentage of orientations related to the Sun is notably lower than in other parts of the Maya Lowlands.

The orientations to the major lunar extremes (also known as standstill positions), which are quite rare elsewhere, constitute the most prominent group on the northeast coast, most likely reflecting the fact that the worship of the goddess Ixchel, associated with the Moon, was very important in the region, particularly during the Postclassic period, when most of the buildings included in the study were constructed. The lunar alignments are regularly associated with those referring to the solstices; the analysis of declinations corresponding to both groups has disclosed that their referents must have been predominantly the major northerly extremes of the Moon on the western horizon and the southern (winter solstice) extremes of the Sun on the eastern horizon. It is thus possible to conclude that a special attention was paid to the full Moon extremes, considering that these phenomena are always visible around the solstices and can be observed almost simultaneously with those of the Sun, but on diametrically opposed horizons. The significance of lunar orientations can be accounted for by the Moon’s aquatic and fertility symbolism, which was likely based on the observed correlations between lunar cycles and the periodicity of climatic variations and other changes in natural environment, whereas the combinations of lunar and solstitial alignments are congruent with the conceptual relationship between the Sun and the full Moon, characteristic of the Mesoamerican world view. The solstitial orientations represent the second most important group on the northeast coast, conceivably because of their relation with lunar alignments. The remaining solar orientations probably allowed the use of observational calendars similar in structure to those that have been documented in other parts of Mesoamerica and whose purpose was to facilitate a proper scheduling of seasonal activities. For the third most significant group of orientations on the northeast coast we propose some stellar motives, but the hypothesis requires further testing. Finally, by analyzing the orientations of coastal structures, we note that many of them exhibit a rather close correspondence with the adjacent shoreline, but since they also pertain to astronomically significant groups, we argue that the seafront buildings must have often been erected on selected places, where both astronomical and topographic criteria could be met.